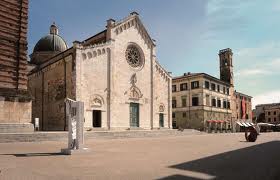 Pietrasanta was established around the middle of the 13th century; it is now an internationally recognised centre of marble and bronze crafts. It has an amazing concentration of artists’ workshops and provides a meeting-place for important sculptors and painters from all over the world.There are many historic works here, from the Cathedral of Saint Martin (13th to 14th century), to the suspended church of the cult of Saint Augustine (14th century), and from the civic tower with internal staircase (maybe the work of the great Michelangelo) to the Sala Fortress. There are also many contemporary works created by some of the best artists of our time and subsequently donated to the town, which led to it being described as “the Little Athens” a few years ago. Masterpieces by Kan Yasuda, Botero, Mitoraj, Adami, Tommasi, and Cascella adorn this small town which can claim a very particular record: the greatest number of art galleries per head of population, 1 for every 1200 inhabitants.As you walk through the centre, it is easy to come across famous artists who often visit the relaxing atmosphere of Pietrasanta and take advantage of its excellent workshops to create their masterpieces. Fernando Botero, Igor Mitoraj and Girolamo Ciulla are among the artists who have decided to move to Pietrasanta permanently, contributing to the creative ferment which characterises this little town.Pietrasanta is a cultural reference-point for the whole of Versilia; over the years, it has become the main centre for exhibitions and events at international level, hosting writers, musicians and poets from every part of the world.Located just a few kilometres from the beach and the pine-woods, this town certainly deserves to be visited and explored by anyone who chooses to spend their holiday on the coast of Tuscany.